In 1940, accepting that the over-stretched defences along our coast may not be able to withstand a German landing, serious thought had to be given how to improve the situation. Throughout the country, hundreds of miles of inland defence lines were initiated. These made use of the natural contours of the land such as rivers, woods, marshes etc.

Where no ready barrier was evident, a ditch was dug often many miles long. To be effective against tanks or armour the criteria laid down was for the ditch to be at least twenty feet wide and eleven feet deep. Fortified by infantry and artillery pill-boxes, concrete anti-tank obstacles, barbed wire and gun emplacements, this project was mostly completed by the autumn of 1940. 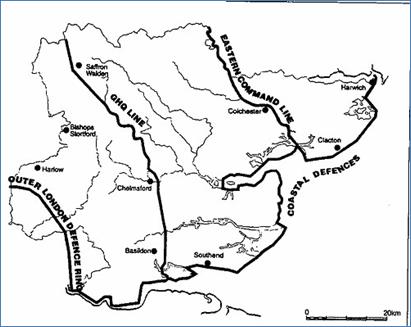 As they were envisaged in 1940, the purpose of stop lines was three-fold.

Firstly, they were forward boundaries for reserves moving up to confront an invader. British units needed clearly defined and protected boundaries up to which they could advance before counter-attacking German forces.

Secondly, stop lines were to act as places where enemy mechanised troops that had broken out of the beach defences could be confronted and held up. This was to be achieved by the building of fortified “Nodal” points, which were chiefly villages that represented bottlenecks in the road network and were perfect

places to impede the passage of armoured vehicles.

Bures was classified as a Nodal point because it was the intersection of the River Stour, the B1508 and the Nayland Rd,

Thirdly, and only in the last resort, they formed static defensive lines. The idea being that you could slow the enemy down for long enough to bring up reinforcements to counter-attack

In total seven Stop Lines crossed Suffolk, such was the concern that the Germans may attack by the East Coast.

The Coastal Defence Line: - this ran from Harwich along the coast into the Thames Estuary

Many of the areas behind the coastline were heavily fortified to prevent an invading force pushing inland. Very little remains today of these fortifications, as the local councils soon after the war were keen to clear up their holiday coastlines.

The Eastern Command Line: (later known as the Corps Line)

The ECL was just one of many fortifications, an English version of the French and German stop lines used during World War 2. This was the most heavily fortified line running through Suffolk

This line was the first inland defence line to be met by a German force driving in from the Essex coast. As the name suggests, the task was to hold this line at all costs. Retreating was not an option.

The capture of Colchester was unthinkable. The loss of an army barracks, communication site and a garrison town would have been a major disaster for the British.

The line started at the mouth of the River Colne near to Brightlinsea. However, many books incorrectly quote the starting point at Wivenhoe or even Colchester.

Consequently, this would leave the River unprotected for several miles which makes it totally implausible.

The River Colne from Brightlinsea acted as a natural anti-tank barrier, running north to Colchester.  Over 120 defensive sites have been recorded in the 9.5 miles of this stop line around Colchester including roadblocks, pill-boxes and other gun emplacements.

The line then continued its path following the river through Fordham, Ford End and onwards to Chappel.

Consequently, it was heavily fortified with pill-boxes, gun emplacements and anti-tank barriers. The defences include examples of the four major types of pill-box built along the Eastern Command Line (Nodal, artillery, infantry and anti-aircraft) in addition to lines of anti-tank cubes and cylinders and two spigot mortar emplacements.

The 8th Battalion of the Essex Home Guard manned the defences. 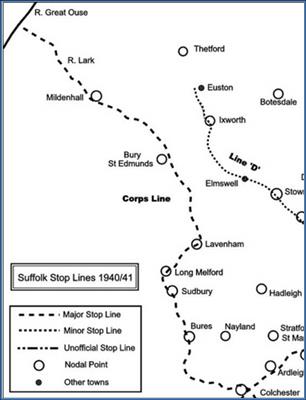 The line then headed north following the railway embankment to Bures. The track alternates from deep cuttings to high embankments between these two villages, an ideal man-made Obstacle. From here it deviates away from the railway and follows the Stour on the Essex side to Sudbury.

It continued to follow the Stour to Rodbridge Corner, to Long Melford, Lavenham, Cockfield and then to Bury.

From here it followed the River Lark through Mildenhall, to where it joined the Great Ouse.

Finally terminating at Kings Lynn and the Wash

<< Images of Pill-boxes along the Stour north of Bures.

There were 198 recorded boxes along this Eastern Command Line, approximately 90 still survive in 1998.

Apart from Pill Boxes, the line was reinforced with anti-tank measures. These made use of natural features such as rivers, woods and marshes. Where no natural obstacle was available, man-made barriers were constructed, such as ditches and concrete tank traps to impede their progress. Two of these tank traps were placed either side of the Bures bridge in its centre, making it too narrow for a tank to negotiate.

The 11th Corps Eastern Command Line (also known as the Corps Line) was the responsibility from the Colne to Wakes Colne Viaduct by the 15th Div Royal Engineers (RE).

In Suffolk, the line was divided into three sectors, with a Royal Engineers Field Company (228, 229 and 230) responsible for each sector.

The Field Companies were deployed to the area in July 1940 to start building the structures to form the Command Line until September when the War Diaries note a slowdown in work.  By October 1940 no more pill-boxes were to be built, those already under construction were approved to be completed. 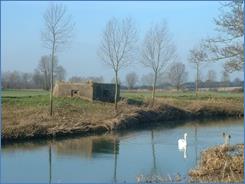 (1) The Pillboxes and heavy to medium artillery emplacements were constructed by civilian contractors, the siting of the pill-boxes being determined by the Division based in the area. Once the site had been chosen, RE Field Companies handed over the details to the contractors.

The primary workforce in the Bures area seemed to be a travelling gang of Irish labourers.

Locally some of the boxes were constructed by Henry Everett & Son, a Colchester based building company.

Contractors were appointed by the Federation of Building Contractors through a District Leader and Group Contractor.

(2) Roadblocks were constructed by County Councils under the supervision of the Divisional Road Engineer of the Ministry of Transport.

(3) Direct labour (some unpaid volunteers) was employed in clearing fields, tree felling and trimming up the anti-tank ditch.

(4) Divisional engineers prepared all the river bridges along the line for demolition. At the same time,  civilian contractors were responsible for damming streams in order to make for improved anti-tank capability. 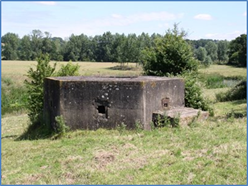 In reality, the construction of the lines was often more haphazard, with all these stages proceeding concurrently, rather than in the prescribed sequence

. An Operational Order from XI Corps from 18 July 1940 laid down specific responsibilities for those building this defensive line in an effort to make the process of construction more efficient.

The actual situation on the ground was summed up by the war diarist of 229 Field Company Royal Engineers, who were responsible for a section of the Corps Line between Lavenham to Chappel, during July to October 1940. He wrote in clipped military style

“Took over Command Line from Lavenham to Earls Colne. Indescribable chaos. Everybody has a finger in the pie, without any coordination. Roadblocks – – the most important thing don’t exist, spent days trying to get a ruling, no one will give decision decide to act. Ministry of Transport at Bury St Edmunds agrees to a proposal and will order the work.  I say, if no action within 24 hours will start work with local contractors. “This shakes them”

In May 1940, when an imminent invasion was feared, the Royal Navy had made available a large number of guns that had been removed from warships.

These had been scrapped after the First World War and retained in store. The majority were assigned to the Emergency Coastal Defence Battery programme, with a number of smaller weapons were mounted on mobile and static mountings to be used as anti-tank guns. The guns were mounted on modified ten-ton lorries 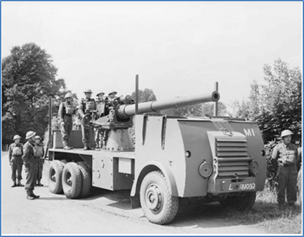 Two were allotted to the Eastern Command in 1940-41 and manned by personnel from Field and Medium Artillery Regiments.

Dad’s Army humour is provided, if desired, by these mobile anti-tank guns.

The arc of fire was very restricted, so that the gun could only be fired directly ahead or behind.

If the gun was fired facing sideways, the force of the recoil could turn the vehicle over.

One report suggests that when the gun was test-fired facing forward, the recoil forced the lorry moved back 200 feet. The experiment with these improvised vehicles was short-lived and they were soon abandoned. The likely hood of more injuries to our own staff rather than the enemy.

But as early as the winter of 1940/41 the newly built stop lines were subject to a considerable change. In a significant re-organisation, a decision was taken to retain only two lines (The Corps and the Back Line), and

the others were effectively abandoned. The network of nodal points remained in place, however, and became of greater overall importance, with some places receiving additional fortifications and defences.

This new scheme of defence was to remain until 1943, when fears of a German invasion dwindled and

Britain’s military began to think about a return to occupied Europe, rather than home defence.

The story of Suffolk’s stop lines is one of rapid development in 1940, followed by a major change in late 1940–41 to just maintenance.

During the same period, another decision was taken to retain only two lines (The Corps and the Back Line (Colchester to Beccles) ),  the others were effectively abandoned.